For millions arriving in the UK every year, the facades of Heathrow airport help deliver the first impression of Britain. The £4.3 billion cost for the airport’s development therefore revolved around creating a positive impact. 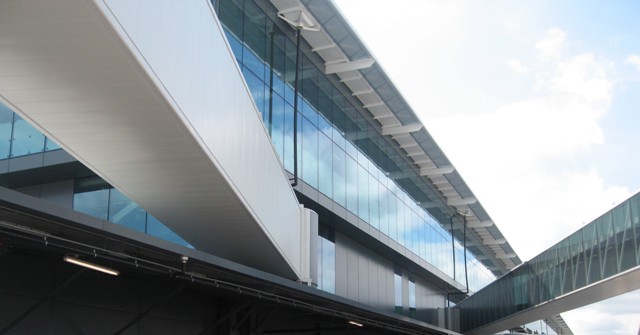 Richard Rogers’ Terminal 5 is arguably the greatest modern airport in Europe, a project on which Wintech carried out a range of facade engineering consultancy services for construction managers Carillion and support assistance for some contractors on this showpiece development. Our work continues on the new T2 facility which is due for completion in 2014.

A unique architectural feature of the main terminal building is the single span roof, the largest ever built at 156m in a single wave form.  The fully glazed facade leans out at an angle of 6.5 degrees giving the building its distinct shape and is comprised of over 5,500 glass panels providing fantastic views of the airfield.  At 40m high, 396m long and 176m wide it is perhaps one of the UK’s biggest free-standing buildings. The roof of the main building covers an area of 70,000m2 with approximately 9,000m2 of rooflight glazing each being 130m long.

With the help of Wintech who are providing influential consultancy support services to Inasus from Spain, Terminal 2 at Heathrow is currently in the process of being transformed into a contemporary facility with remarkably improved services designed for every visitor. The £1 billion project, by architects Foster + Partners, is a joint venture construction project between main contractors Hetco and Laing O’Rourke and is designed in a way that will produce less carbon than the previous terminal building.

Wintech consultants played an influential role in the design of T2’s facade, which had to accommodate substantial building movement. Working with Inasus, Wintech provided strategic advice and systems engineering support taking the project through to completion. The new terminal building’s structural steelwork has recently been completed, 2 years ahead of its planned opening in 2014. The terminal will handle over 20 million passengers a year.