Midlands 5-a Side Football Façade Tournament 2019

For this year’s charitable challenge, Wintech have organised and took part in the Midlands 5-a Side Football Façade Tournament. On Sunday, 28th of April, with the help of Prater and Structal UK, Wintech have managed to raise the bar and kickstart the initiative, by playing in aid of Cancer Research UK.

The event was held at Goals, Dudley and it comprised of a number of charitable matches among the mentioned teams. Wintech competed against Prater during the final match which resulted in a tight game with the latter team being victorious. Everyone shared the same interest and worked towards accomplishing our joined goal: Let’s beat cancer sooner!

Therefore, we would like to say a big thank you to everyone involved and congratulations to the winners!

Donation lines are still open and can be visited at: https://www.justgiving.com/fundraising/facade-football-tournament 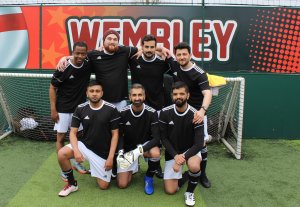